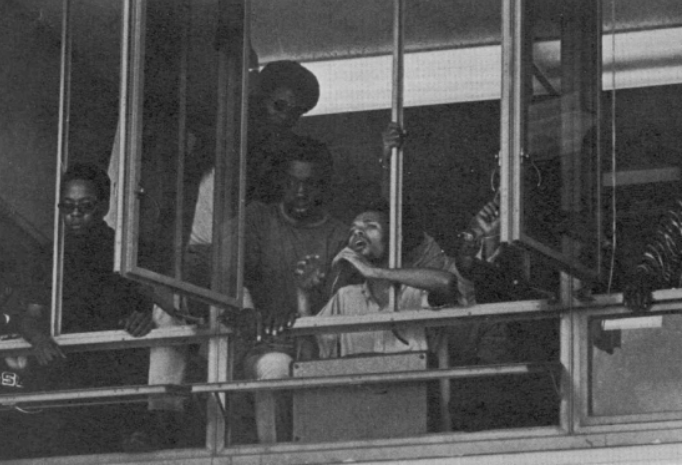 Today, many colleges across the nation offer students the opportunity to learn about the Asian American experience.  But this wasn’t always the case.  The new academic field of ethnic studies, including Asian American Studies, Black Studies, Chicana/o Studies, and Indigenous Studies, emerged from student activism at San Francisco State College, UC Berkeley, and elsewhere in 1968 and 1969.  At UCSB, Asian American Studies did not arise from activist mobilizations. Instead, it was Black students who initiated UCSB’s fight for ethnic studies.

In October 1968, 12 members of the UCSB’s Black Student Union (BSU) barricaded themselves in the North Hall computer lab and refused to leave until the Chancellor agreed to their demands. They were using the methods of sit-ins and civil disobedience to bring attention to their cause after previous attempts to speak with the Chancellor were unsuccessful. Their demands included hiring of more minority staff and faculty and firing of certain staff members, a reporting system for incidences of racism and harassment, and the implementation of a Black Studies department at UCSB. Although spectators were initially hostile, over the course of the day, over 1,000 students — many of whom were White — gathered to support them, even chanting “Whites support blacks!” Eventually, Chancellor Cheadle agreed to seven of the eight demands. BSU’s North Hall takeover set a precedent for student activism and catalyzed the development of ethnic and gender studies departments at UCSB. (To learn more about North Hall take-over, visit the website for the Department of Black Studies at UCSB. An article in the The Bottom Line describes the Black student struggle that emerged 45 years after the North Hall take-over.)

The development of the Asian American Studies (AAS) program at UCSB drew its inspiration heavily from the precedent set by the struggles for ethnic studies throughout the state and at UCSB. UCSB’s AAS program originated and developed separately from the Asian Studies program. Whereas Asian Studies focuses on the histories and experiences of Asian countries and its citizens, AAS centers the unique histories, cultures, and challenges of Asian immigrants and their descendants, with a focus on social justice.

Originally, Asian American Studies at UCSB started in 1969 as a two-year program under the Agency for Experimental Programs. It was spearheaded by Asian American students in the Sociology department who felt the need for AAS but didn’t have the structural support of an existing department. With assistance from faculty in other fields, the students were able to add a background in AAS to their degree.

The program officially began in 1972 as a subset of the sociology department. It offered four courses, covering the Asian American experience from 1840 to its present and analyses of different prominent Asian American communities and their histories, cultures, and social hierarchies, including the interactions between the different ethnic groups. The program also offered an independent studies course for individual research projects. Although faculty members of the program requested full departmental status in 1974 in a joint demands list with other cultural and political organizations and the Educational Opportunity Program (EOP), the university denied the demand due to the small size of the department. Between 1974 and 1984, new courses were slowly added to include a course on the relationship between The Pacific Basin and the United States, as well as multiple courses on fieldwork and community studies. 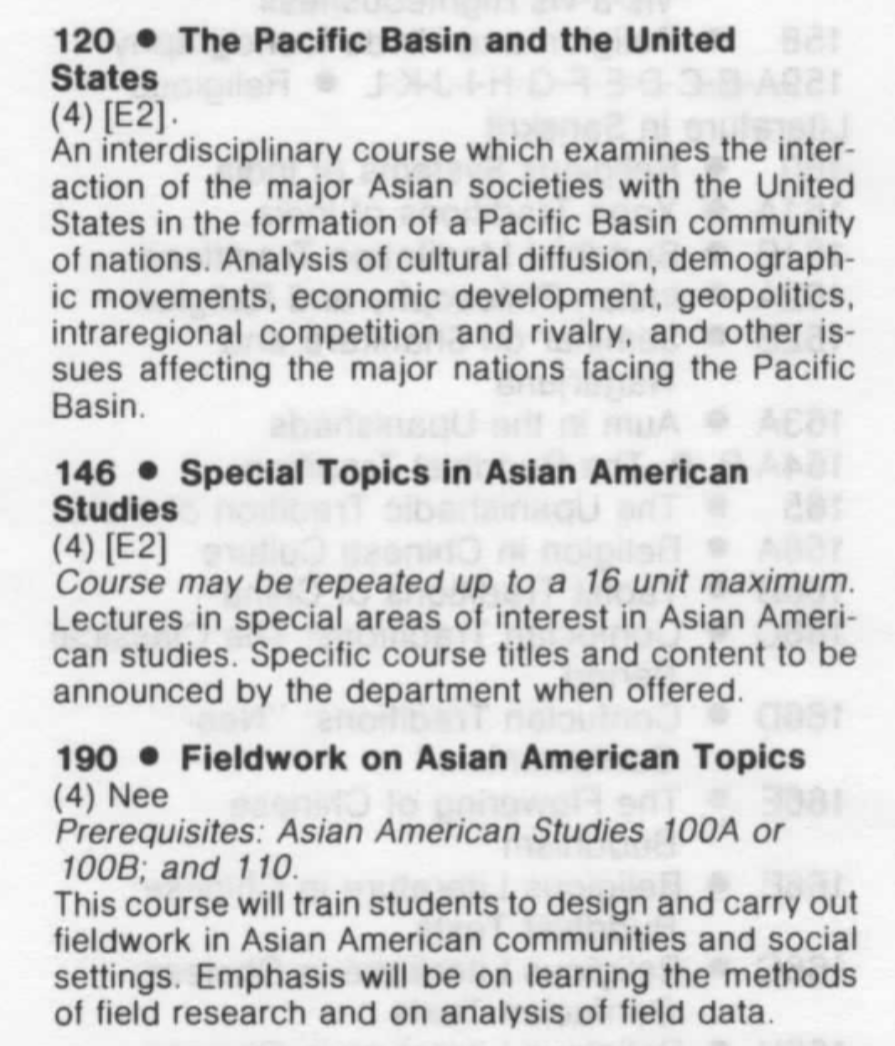 At UCSB, the Black Studies and Chicana/o Studies programs became departments in 1969, following the North Hall takeover in October 1968 and the April 1969 meeting at UCSB of Chicano student organizations nationwide that resulted in El Plan de Santa Barbara creating a strategy for establishing Chicano Studies on college campuses. By contrast, AAS remained a program until 1995. This was due to the high turnover rate of professors within the program and the lack of institutional support in growing and expanding the program into a department. In its early years, the only consistent lecturer was Tetsuden Kashima, who split his time between the sociology department and AAS. Throughout the 1970s and 1980s, faculty from other campus departments, most prominently sociology, stepped in to temporarily direct the program. The program also hired part-time lecturers to teach the various courses offered. When the second director resigned in 1988, the university appointed a new chair, Professor Sucheng Chan, newly arrived to UCSB with the intention of developing AAS.

This shift in leadership resulted in the growth of faculty and the development of the curriculum.  In the 1989-90 academic year, Chan reorganized the curriculum to add new courses on Asian American history and politics as well as women’s studies and artistic aspects of AAS, including films, fiction, and popular culture. Chan’s leadership guided the program’s transition into a department and enabled UCSB to offer the first B.A. in AAS at any major research university. Learn more about the transformation of the Asian American Studies at UCSB. 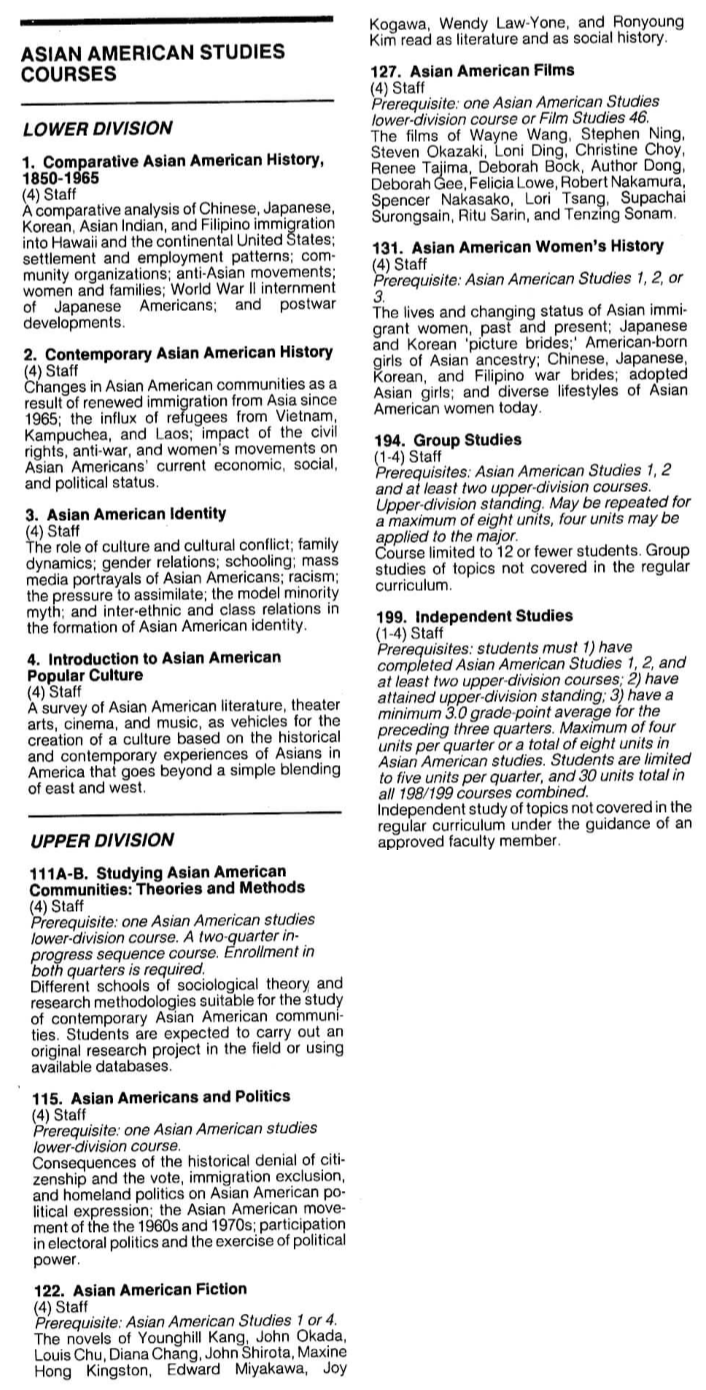