On February 21, 1989, students began what turned into a 12-day hunger strike. From at least 1987, Black students initiated a demand for a multicultural center, while Asian American students issued a set of 9 demands, including a two-course Ethnic Studies requirement. Along with faculty participants, thirty-nine student hunger strikers, primarily with El Congreso and SCORE (Student Commission on Racial Equiality), which included the Asian Student Coalition and the Black Student Union, launched a multiracial struggle that resulted in the establishment of the MultiCultural Center and the Ethnicity requirement. Today, the MultiCultural Center is a vibrant space of programming on race and intersectional justice issues and an important space for students of color, while the one-course ethnicity requirement enables sustained learning about race and racism for students across the campus.

The students in AS AM 163 researched the activist history of the hunger strike, ethnicity requirement, and MultiCultural Center and present here a timeline of this struggle.

Demands for a MultiCultural Center, led by Black students at UCSB, begin in response to the multiple incidents of blackface at the university.

Separately, Asian American students release a set of 9 demands, which include a 2-course Ethnic Studies requirement and support for other marginalized communities.

The L&S Executive Committee distributed a poll regarding a proposal for a two-course Ethnic Studies requirement which was defeated with 229 votes of disapproval to 127 votes approval. 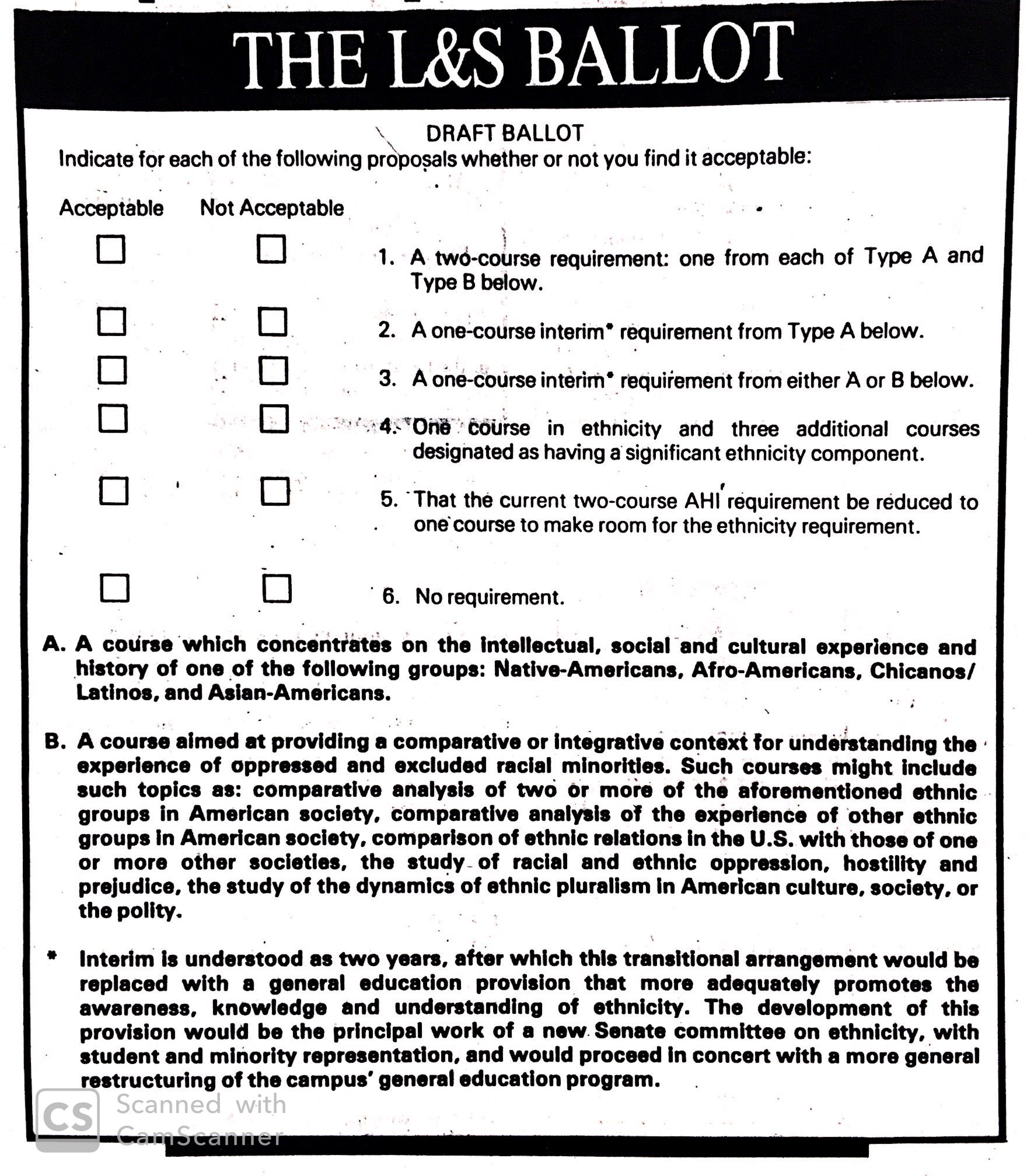 In response, the 12-day hunger strike begins in front of Cheadle Hall. The strike included including 39 members of El Congreso, SCORE, the Asian Student Coalition, and the Black Student Union. Faculty also participated. 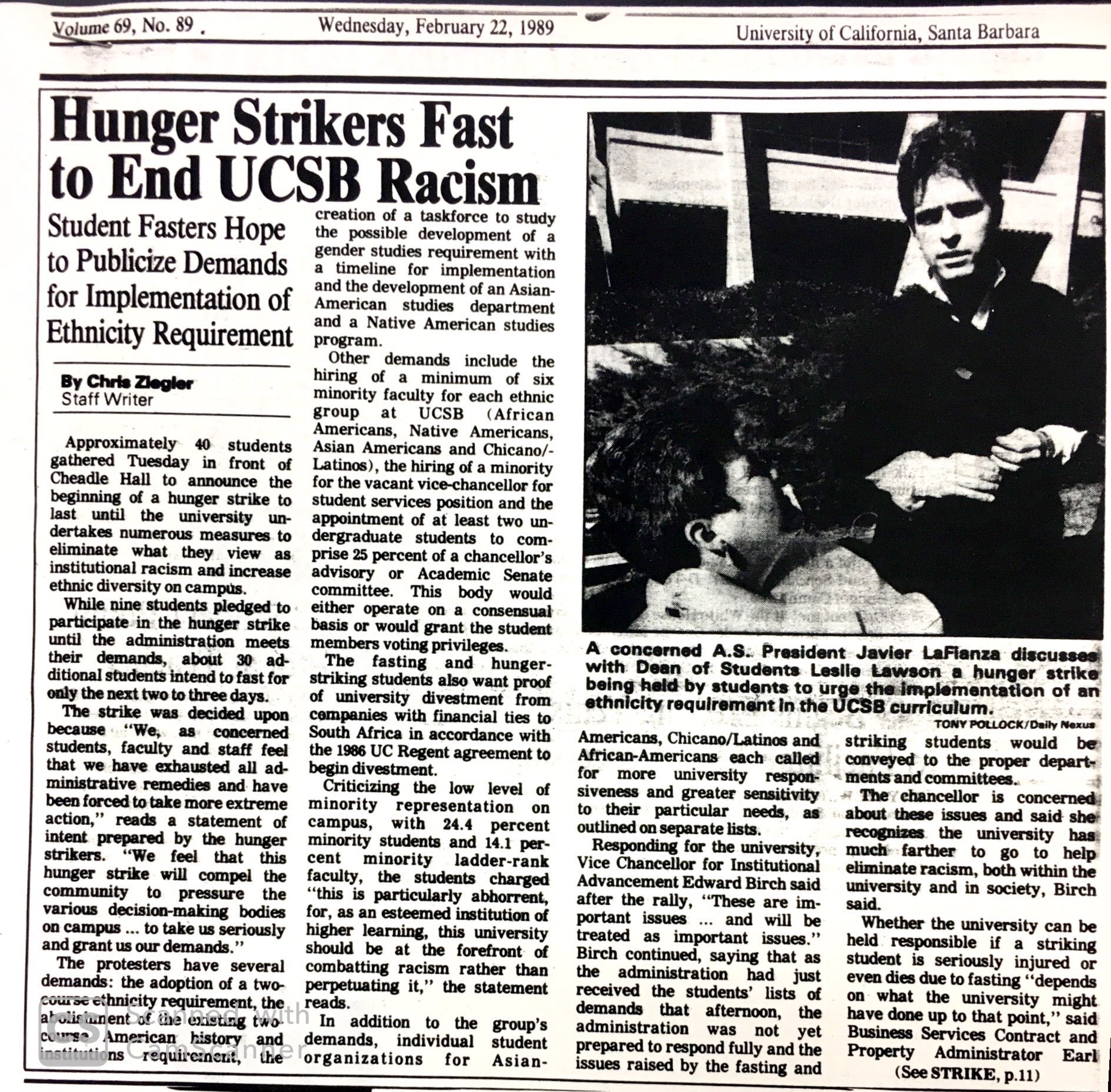 Black, Chicano, and Native American faculty and staff release a letter to the UCSB campus community giving their written support of the Hunger Strikes. They urge the campus community to nullify the present Ethnic Studies requirement ballot, advocate for a more meaningful Ethnic Studies Requirement, and urge general support for the Hunger Strike. Faculty and staff also suggested hosting teach-ins in place of regularly scheduled classes.

Beginning at 10am, the students will conduct a day-long teach-in at the entrance of the Cheadle Hall administration building to “educate the UCSB community about the current hunger strike against institutional racism/- sexism and student disempowerment.” 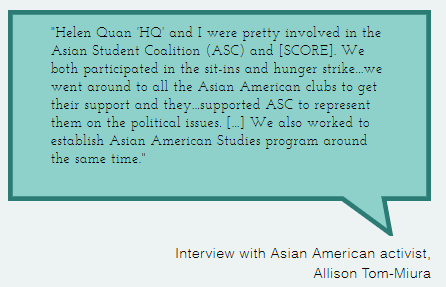 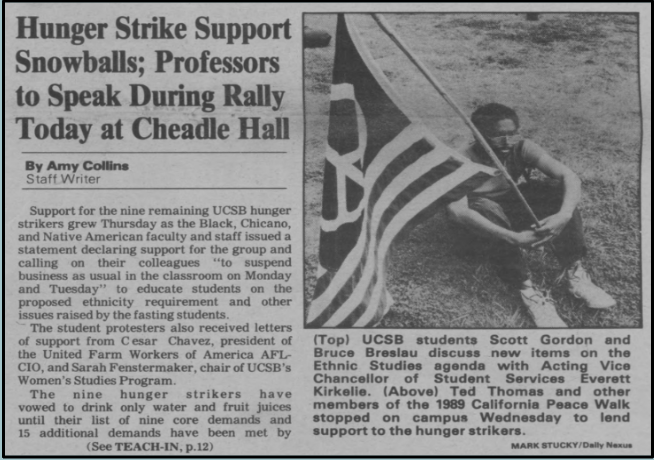 A second poll is taken regarding the Ethnicity Requirement. The majority of faculty members continue to oppose an ethnicity course requirement. 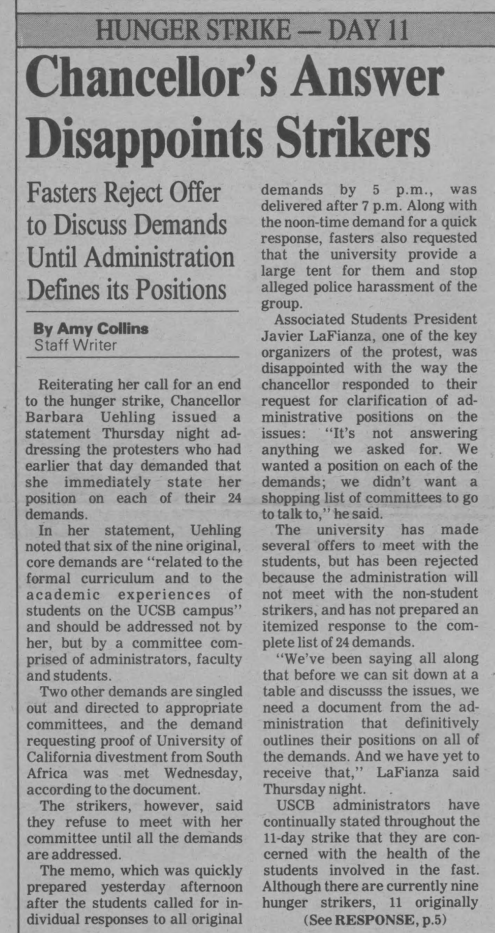 The MultiCultural Center is successfully established. Originally, it was located in Annex Building 434 and shared the space with the Women’s Center. 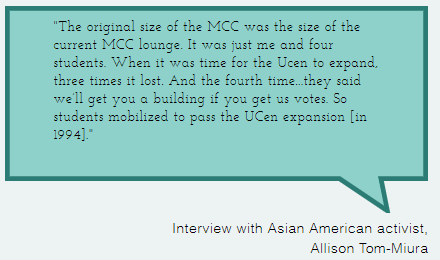