The Student Resource Building (SRB) at UCSB opened its doors in May 2007 with the goal of providing students of color with adequate resources during their time on campus. Many people are not aware of the history behind the establishment of the SRB. The SRB was not provided by the administration instantly. It took years of student activists protesting and meeting with the administration to have their voices heard and demands met.

In the 1990s, several racially discriminatory events occurred that lead to the student demands for greater services for students of color. The assault on Tom Tieu in 1990 as well as the social climate at UCSB spurred many students of color to seek culturally relevant resources from the departments such as the Education Opportunity Program, the Women’s Center, and Education Program for Cultural Awareness. Students sought these resources on a campus with a very low enrollment of students of color. At the same time, activist struggles—including around 1992 verdict acquitting the police officers in the beating of Black motorist Rodney King and ensuing Los Angeles rebellion, 1994 Chicana/o Studies hunger strike, and protests against California propositions such as the Three-Strikes law and anti-affirmative action proposition—reflected the frustrations of communities of color. Many students of color wanted the administration to address the lack of cultural spaces on campus.

In this growing political climate in the 1990s, students called for universities to expand cultural awareness and services.  As one former student and 1998 protester, Blia Yang, stated, “Campuses need to continue to listen and to incorporate those needs and services into the student experience and providing a safe place to go”.

On March 4, 1998, the UCSB Daily Nexus published an article where an Isla Vista patrol foot officer made disparaging remarks about the Vietnamese and Hmong population in Isla Vista.

Asian-American students quickly gathered after the article was published and worked to organize a protest against the Daily Nexus article on March 6, 1998, and March 30, 1998.

In 1999, students wrote to the Daily Nexus, explaining their proposal for a lock-in fee for the student-initiated and run center. It did not pass in 1999, but it did in 2001, providing funding to establish the SRB.

We present here is a banner that will hang in the SRB to document a brief history of the major events leading to the establishment of the SRB. The QR code links to the documents on this website.  These events were important moments of student activism that played a role in the foundation of the SRB and is a reminder yet again of the importance of remembering the fight and effort made to provide cultural spaces and awareness for students of color. 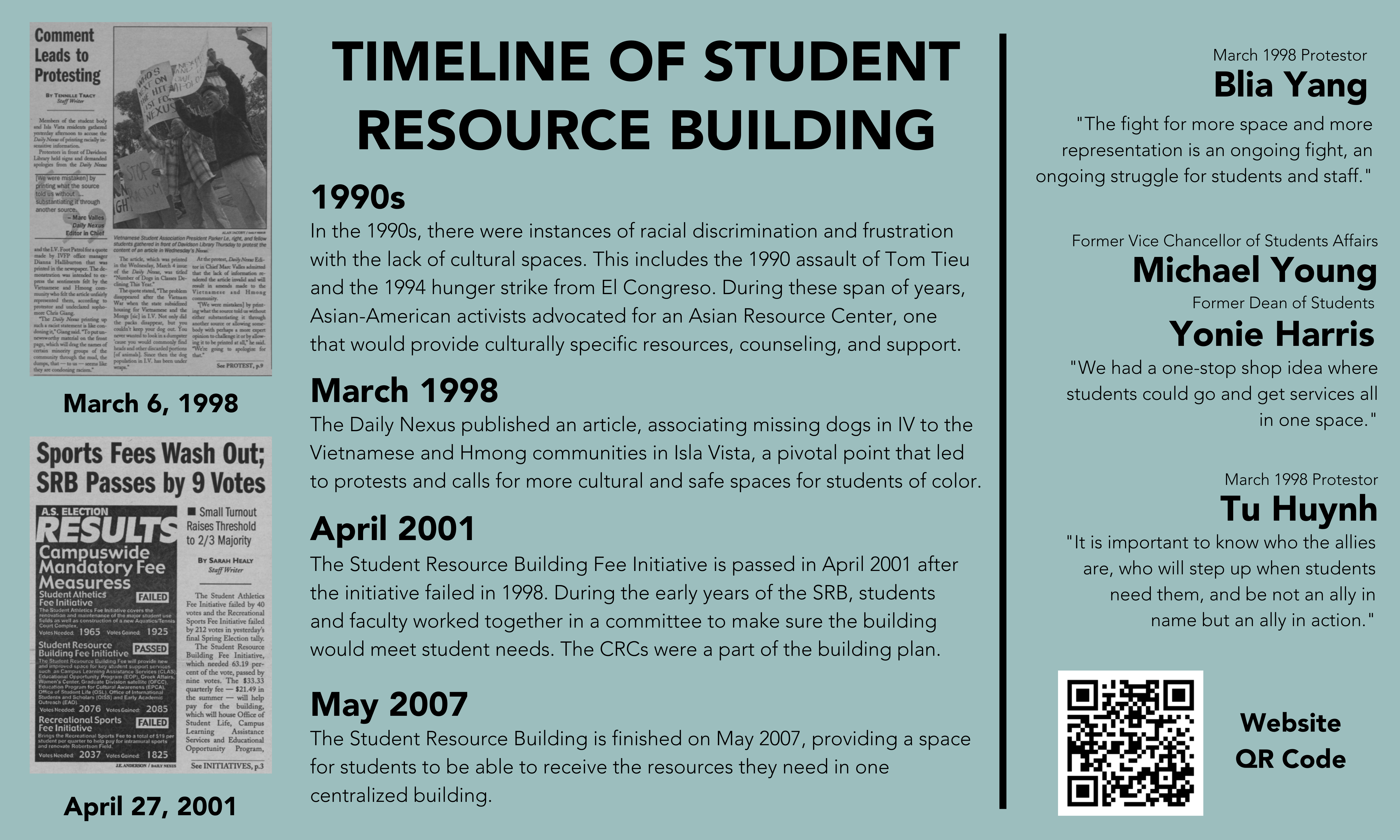